Dakota Jones didn’t just win the mens race at Transvulcania in 2012— he owned it. So much so, in fact, that his hiatus from last year’s event left a vacuum that even a Kilian Jornet course record couldn’t really fill. El Presidente was, instead, off doing rad stuff in the mountains of Alaska. ‘A partner and I camped on a glacier 5,000 feet thick and a mile and a half wide for three weeks,’ he says. ‘We climbed thousands of feet of vertical ice and explored an area and mountain range so exceptionally huge and wild that I still dream about possibilities there.’ Although dreaming of Alaska, his waking mind is firmly focussed on running again and in a little over a months time he’ll be making his much anticipated return to La Palma. 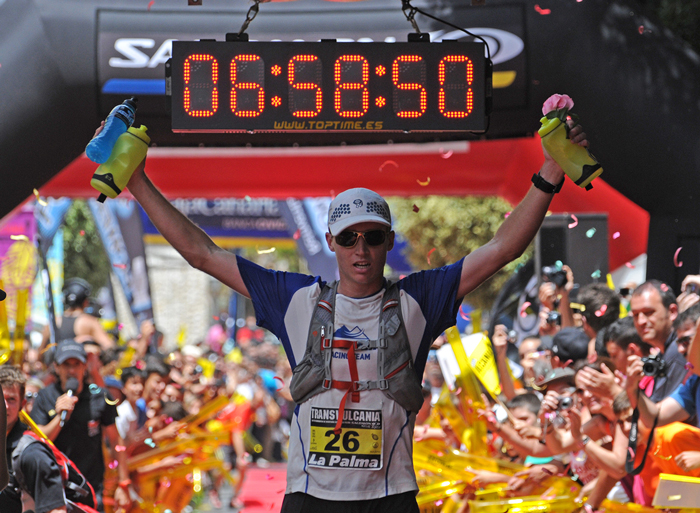 It was early 2012 when Dakota’s Transvulcania story begins. ‘I had just dropped out of college and was spending an evening the usual way – sitting at my desk , saying, “what the hell am I doing….?” Then I got an email from Lauri van Houten from the Skyrunner Federation,’ he says. The words on the screen in front of him, pretty much blew his mind. ‘She said, essentially, “Hey! We’re flying lots of fast runners out to Transvulcania and Zegama this year! Would you like to come?” I read the email twice in total disbelief. Then I went for a run to think it over.’ There’s times to play things cool in life and there’s times to show your slavering, unbridled enthusiasm for something, during his run Dakota figured, quite rightly, that this was a time show his hand. ‘I responded back with a nonchalant, “YESPLEASEI’LLDOANYTHING.”’ Then he scribbled a date in his diary, Wednesday 9th May — flight to La Palma, Canary Islands via Madrid.

It’s easy to forget that Transvulcania pre-2012 was not the world-renowned ultra that it undoubtedly is today. The race’s three editions previous to the landmark race in 2012 were more local affairs, dominated by Spanish runners. All that changed dramatically, however, when the International Skyrunning Federation revealed the race as it’s inaugural Ultra Series event and the island of La Palma as the location for it’s seminal ‘Less Cloud, More Sky’ summit meeting. For one week in May that year, La Palma became the centre of the trail and mountain running universe. The tiny volcanic island saw wave after wave of the worlds best mountain runners arrive at it’s shiny new airport. On one of those flights, a couple of days before the race, a motley-crew of travel-weary, red-eyed American runners arrived — among their ranks was the young Dakota Jones. 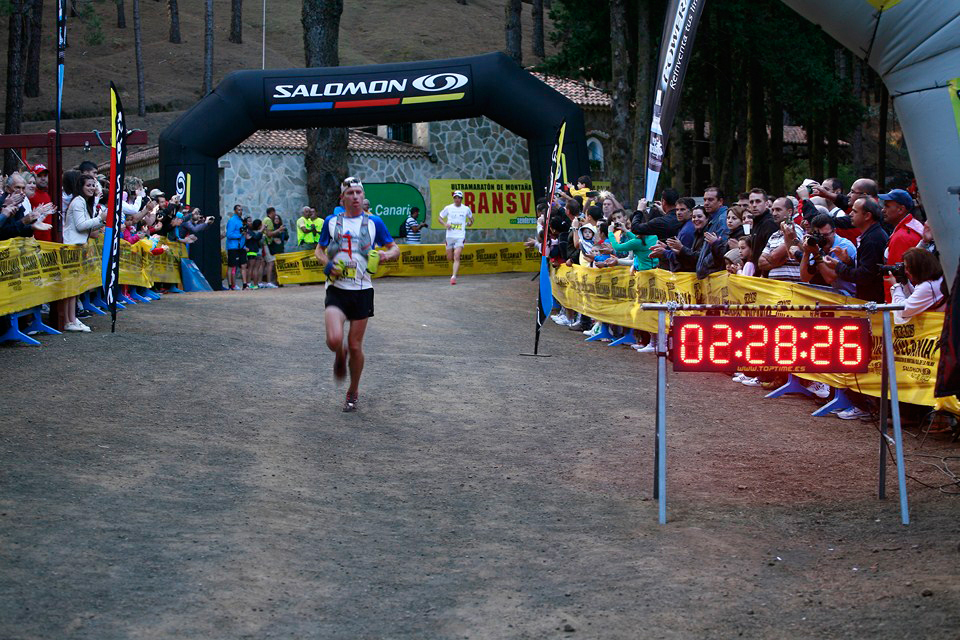 ‘We had just flown all night across the Atlantic and were totally sleep-deprived,’ says Dakota. ‘And that’s when I found out that maybe two days of adjustment isn’t enough when the time difference is eight hours.’ The limited timeframe before race day didn’t only play havoc with his body-clock, it also meant that he had no chance of seeing or running sections of the route. ‘I did exactly zero running on the course before the race,’ admits Dakota, but he did find some time for at least some kind of adventure. ‘I can distinctly remember standing on top of a giant cove with Rickey Gates, debating whether or not to jump into the water forty feet below,’ he says. ‘It didn’t look shallow, but I was scared. I think Ricky was too, but he’s bolder than me and he leaped in. He took a surprisingly long time to hit, but he surfaced with a smile. So I leaped in after him and totally slapped the shit out of my arms on impact. But it was awesome.’ With the long-haul cobwebs washed away, Dakota settled in for some much needed shut-eye before the main event.

It was while volunteering at the Hardrock 100 in 2008 that an eighteen year old Dakota had his epiphany. He’d spent the week leading up to the race in the area, living the mountain life with his Dad — camping from the back go their Ford truck and spending long days wandering the majestic San Juan mountains. When the famous race rolled around he spent a hard night helping out at the Governor aid station, hiking up and down with fresh water and supplies. The peaks, the camaraderie, the race, the people — they all combined to leave an indelible impression on the young Dakota. His mind was made up, he was going to be a mountain runner. 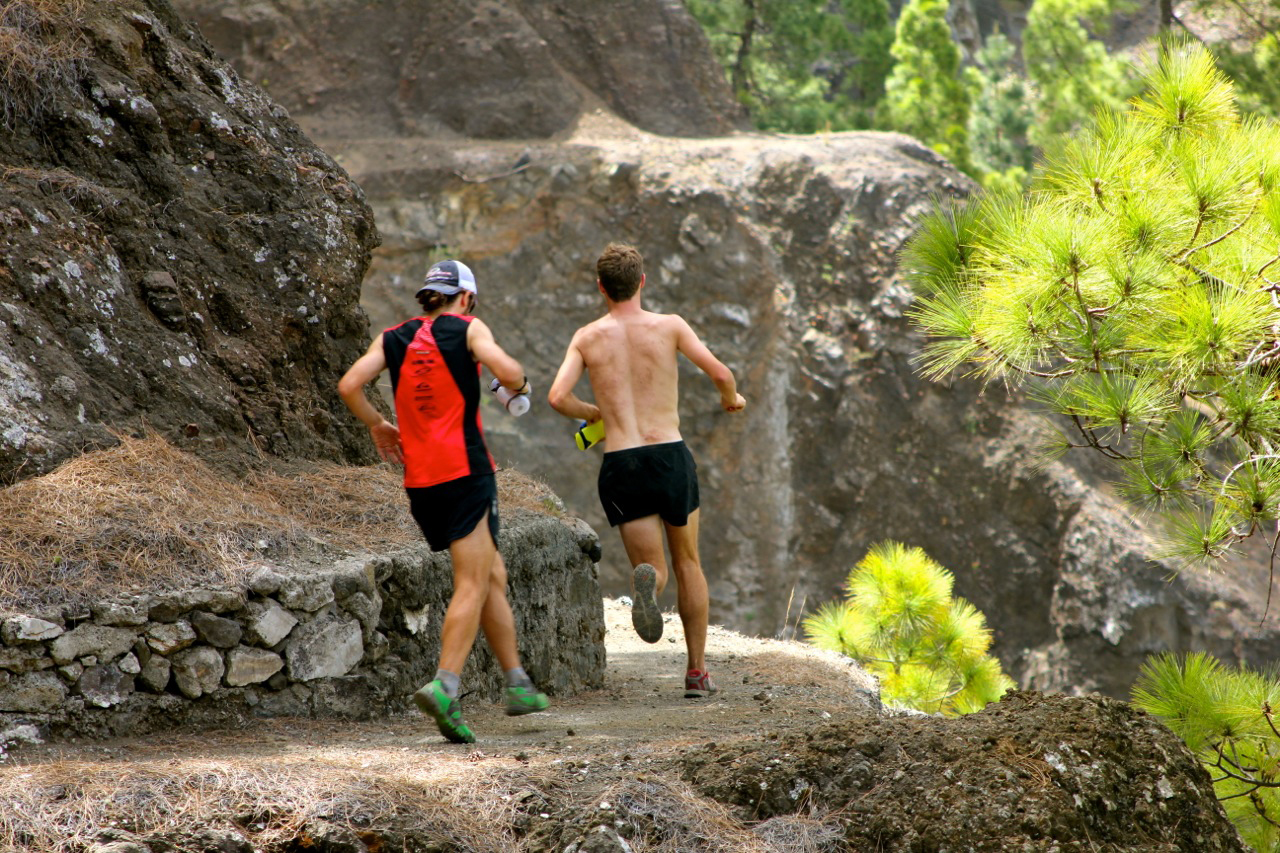 In the pre-dawn darkness on the morning of Transvulcania, Dakota, after a jet-lagged, sleepless night, stood close to the Fuencaliente lighthouse and waited for the start gun. Despite the lack of Z’s he was feeling pretty good, ‘I was confident that I could run a strong, consistent race,’ he says. ‘But I was standing at the start line with Kilian Jornet and Mike Wolfe and Geoff Roes and a ton of European guys I’d never heard of. That’s intimidating.’ The start brought the usual, frantic melee. Adrenaline, pent-up nervous-energy, and a good old-fashioned sense of gung-ho sent the leaders flying off in a cloud of dark sand and bouncing head-torches. Dakota caught them after a few kilometres and the group ran together for a while. Steadily though, he dropped almost everyone, with one notable exception. ‘Eventually Kilian and I broke away from the others,’ he remembers, before correcting himself, ‘Or rather, I ran my own race and Kilian stayed with me, as per usual with him to stay with the leader.’ And so it was, the two ran together and traded the lead through El Reventón and the long climb up to the races highest point; the 2423 meter Roques de los Muchachos. Dakota was in his element, ‘As the race continued I found that I felt great,’ he says. ‘I almost never try to run off the front, but I was running my own race, at what I thought was my absolute limit, and that day my own race happened to be faster than most other peoples.’ With two-thirds of the race and almost all of the ascent completed it looked like it was going to be a straight shootout between Dakota and Kilian. 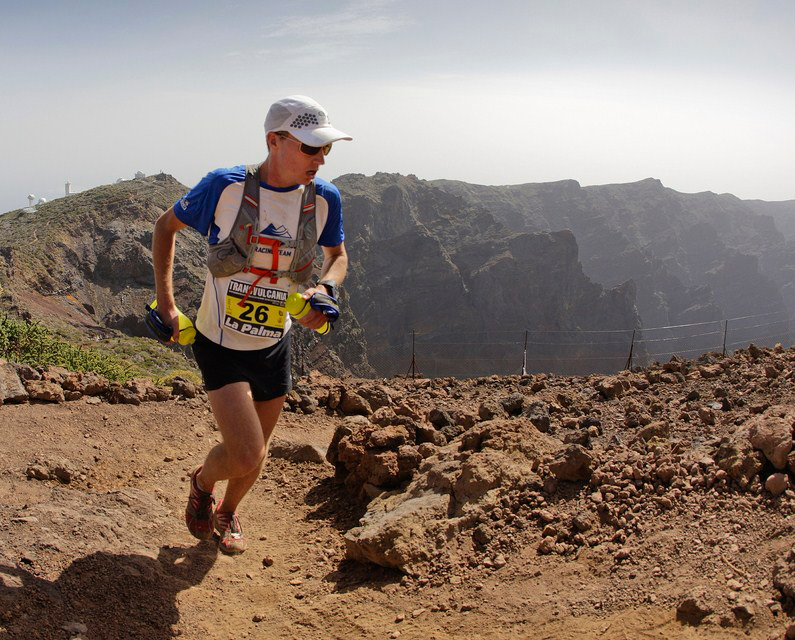 Dakota Jones arrived in La Palma affectionately known to his contemporaries as ‘The Kid’. Since deciding to pursue mountain running, back in 2008, he’d had a pretty meteoric rise through the US ultra-trail ranks and given his young age and boyish looks, the kid tag was no real surprise. Upon leaving La Palma, however, his gravitas had reached such lofty heights that he earned the new title of ‘El Presidente’ — in reality, it actually had less to do with his bad-ass performance and more to do with the even badder dictator sunglasses which he rocked for the race. ‘When we got to La Palma, I went through my luggage and then looked up at Geoff Roes and said, “Dude, I forgot sunglasses.” We then proceeded to walk to the nearest convenience store and buy the gaudiest pair of aviators I could find,’ he says. His rationale for purchasing the Gaddafi-esque, gold-rimmed eyewear is admirable, ‘Why not? If you didn’t bring your nice glasses, you ought to at least have some crazy glasses,’ he says. ‘I was like, “well, these are embarrassing. I hope I don’t get a whole lot of attention.”’ As events unfolded during the remainder of the race that day, his hope for anonymity was about to get crushed.

The decent from the summit of Roques de los Muchachos to the vibrant seafront village of Tazacorte is out and out brutality for tired legs. It’s 20km of mainly steep, treacherous, volcanic nastiness combined with a few sections of fast runnable single-track. It is, ultimately, where the race is either won or lost. As Dakota and Kilian took off downhill it was anybody’s guess as to who would be victor and who would be vanquished. The final act, however, was to produce plenty of drama and an unlikely cameo. ‘About halfway down the last descent Andy Symonds caught us and took off, with Kilian right on his tail. I let them go because I was already running at my limit,’ says Dakota. At first gutted to be dropped, Dakota reckoned that third place was still a good showing and put his head down for the final push to the finish, then, as he puts it, ‘something weird happened’. ‘I caught up to Kilian. He was going slow and I jumped past him, asking, “Are you okay?” to which he quickly responded, “Yes, yes.”’ says Dakota. ‘And that was the last I saw of him during the race.’ Dakota pushed on and, just before the last aid station in Tazacorte, he caught up with Andy Symonds. ‘He said, “Did you have a second wind?” And I thought for a moment and then bluntly said, “No.” And it was true,’ he says. ‘I hadn’t had a second wind. I just stayed consistent, and that happened to work very well.’ Despite being back in the lead and headed for the final climb up to the town of Los Llanos and the race finish, Dakota was still far from certain that he had it in the bag. ‘I struggled up the final climb, waiting every second to be caught by Andy or Kilian,’ he says. ‘Then a spectator said, “un kilometro!” And I looked at him in surprise. Just one kilometre? Then I came into a little town and a police motorcycle fired up and started leading me through suddenly crowded streets. I looked behind me – and nobody was there! I couldn’t believe it.’ Whether he believed it or not, Dakota Jones had just won Transvulcania. 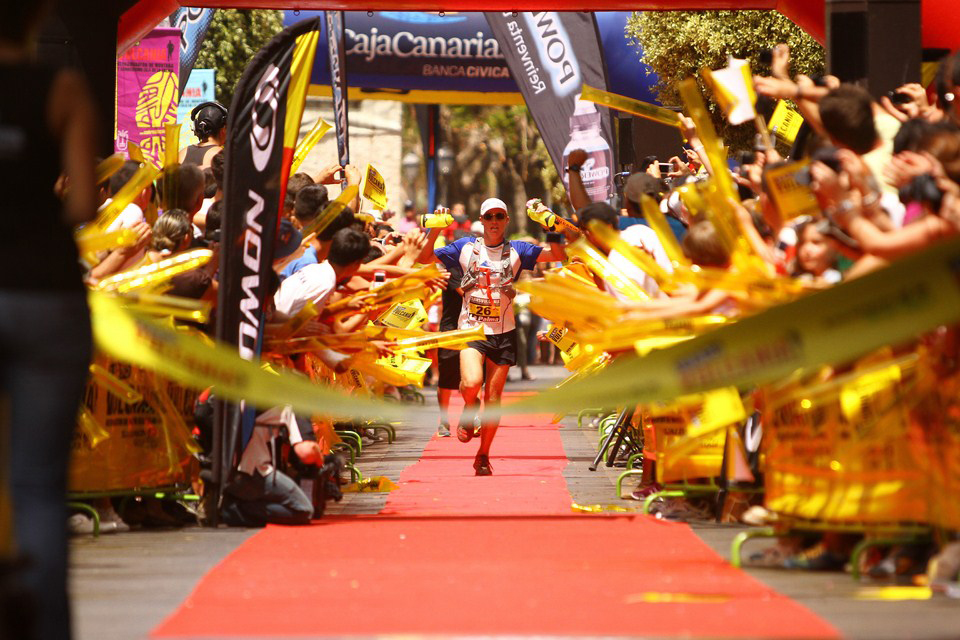 Dakota was not only victorious that day, he also became the first person to break the seven hour mark for the course when he stopped the clock at 6:58:44. That, coupled with Anna Frost’s dismantling of both the female record and the majority of the men’s field, elevated Transvulcania 2012 to a breakthrough moment for the sport of Skyrunning. That both Dakota and Frosty plan to be back competing on La Palma next month is a mouthwatering prospect. ‘I would never deny that running through the chutes on the final mile of Transvulcania with hundreds of screaming fans was one of the coolest things EVER,’ says Dakota. ‘Transvulcania is not only one of the most strikingly beautiful and well-organized races I have ever run, it’s also super competitive. I want to run against the best runners in the world, and if I have to go back to a wild volcano in the Canary Islands to do it….well, shucks, I guess I will.’