This story begins in Grenoble, an attractive city in south-east France. It is through here, in this city of almost 200,000- known as the ‘capital of the Alps’ that a river flows. Its water has the distinctive alpine-look, that sage green, glacial colour that gives a clue to it’s icy origin high up in the majestic peaks of this great mountain range. This river is called the Isère.

Retracing the Isère’s journey from Grenoble into the Alps is a geography lesson for mountain lovers- first head north-east, skirting the impressive summits of the Chartreuse and Bauges mountains to the left, all the way to Albertville, Savoie. Albertville lies at the foot of the Tarentaise valley, where you’ll find the highest concentration of world-class ski resorts on the planet. The river passes through Moutiers, the gateway to the ‘Le Trois Vallees’ that include the ski resorts of Val Thorens, Meribel and Courchevel. Further up the valley it passes through the bustling mountain town of Bourg-Saint-Maurice, in the Paradiski ski-area and finally you will arrive at the rivers source high above the old church tower, dating back to the 1600’s, in the stunning alpine village of Val d’Isere- the official village and start and finish point of the Ice Trail Tarentaise. 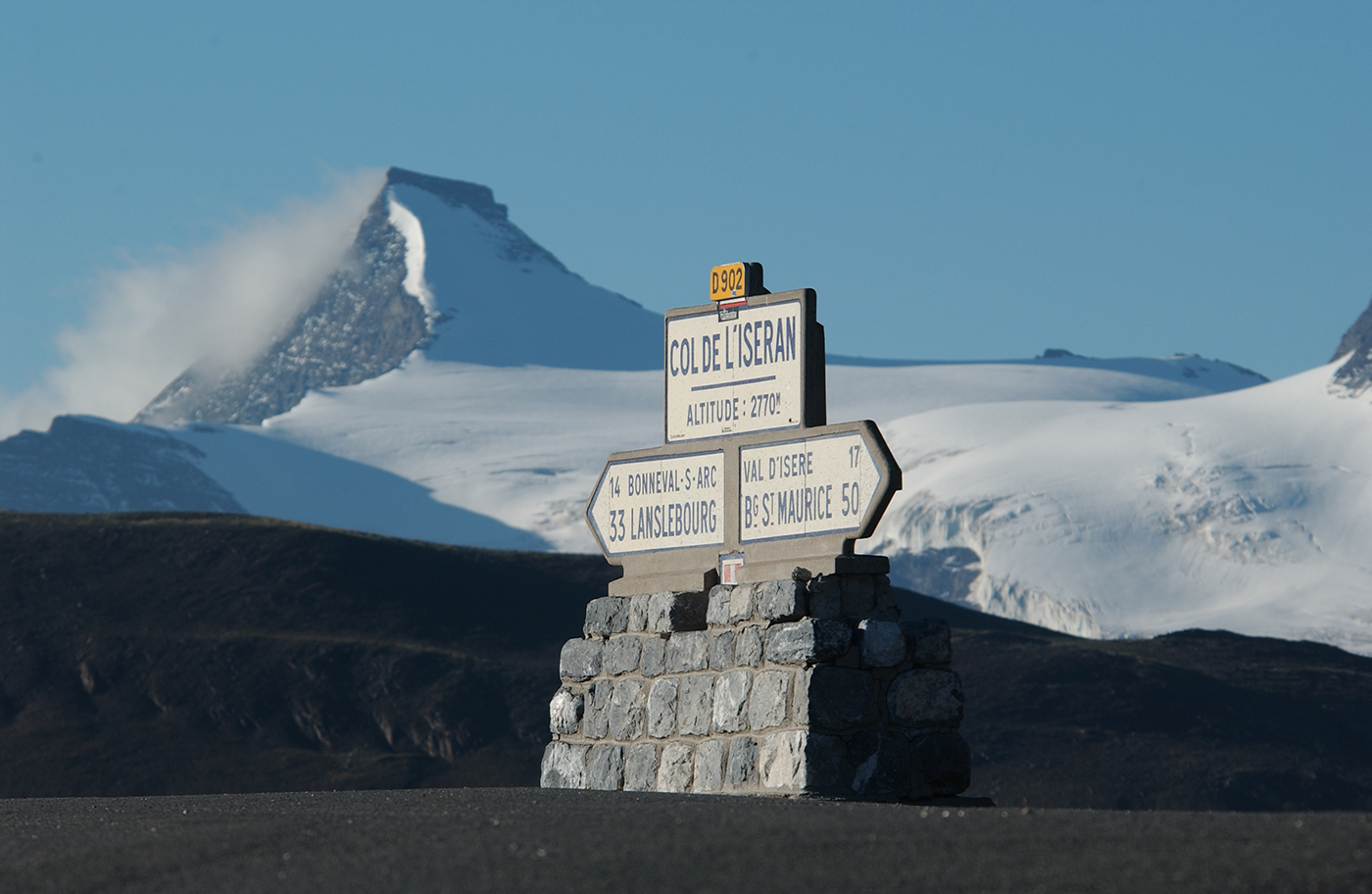 “The Ice Trail is at the frontier between trail-running and alpinism,” says Fabian Manceau, ITT (Ice Trail Tarentaise) press officer, when I ask him to describe the race, “runners reach the highest point, Grand Motte, at 3653 m, after ascending 800 meters on a glacier,” he adds, before listing off other treats that await the competitors, “the summit of Aiguille Pers at 3386 meters; The crossing of the Grand Pissaillas glacier and the Col de l’Iseran, which at 2,770 meters it’s the highest paved mountain pass in the Alps.” To put the challenge into perspective he adds that, “The runners will run approximately 62 km over 2000 meters altitude- there is maybe no other place in the Alps where that’s possible.” Make no mistake, this course is legit. 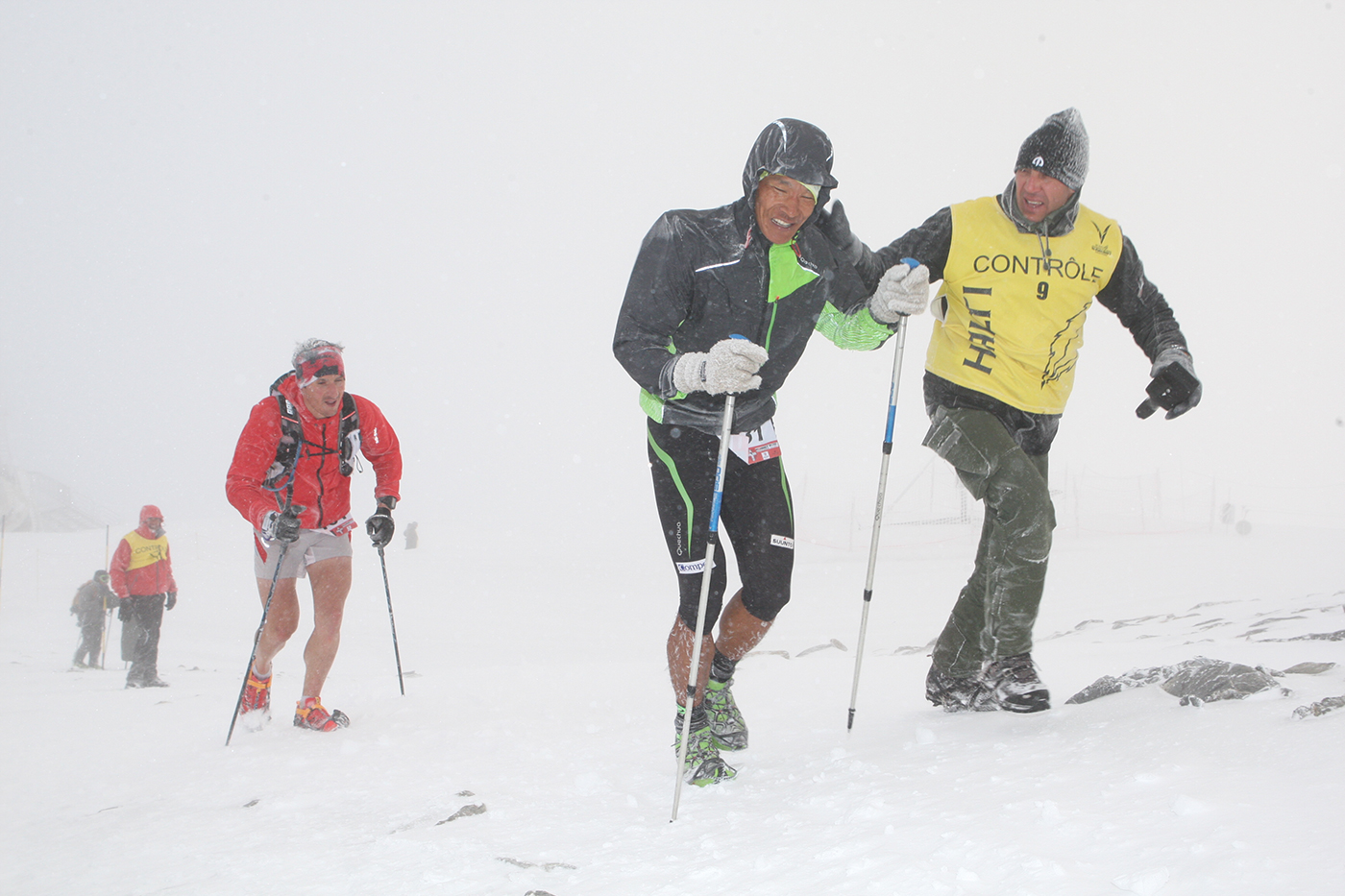 2011 was to be Ice Trail Tarentaise’s inaugural year, Laurent Vinner, the founder of the race, had negotiated access to the Vanoise national park, a major coup that opened up the route to some of the most spectacular terrain imaginable. He organised that Killy-Espace ski guides prepared the ski-area section of the Grande Motte glacier for the runners, while the Haute-Tarentaise mountain guides looked after the area above the pistes, all the way to the summit- preparing a fixed rope; way-markers and ladders or boards if they came across crevasses. The final course was impressive- 65km at high altitude; 5000 meters ascent; 5000 meters descent; a couple of 3000+ meter summits and the aforementioned technical glacier. In a word, epic. So, with everything in place, the race was scheduled to kick-off on the 17th July 2011. Then, on the eve of the race, the alpine weather- as it is wont to do- took a sudden turn for the worst. 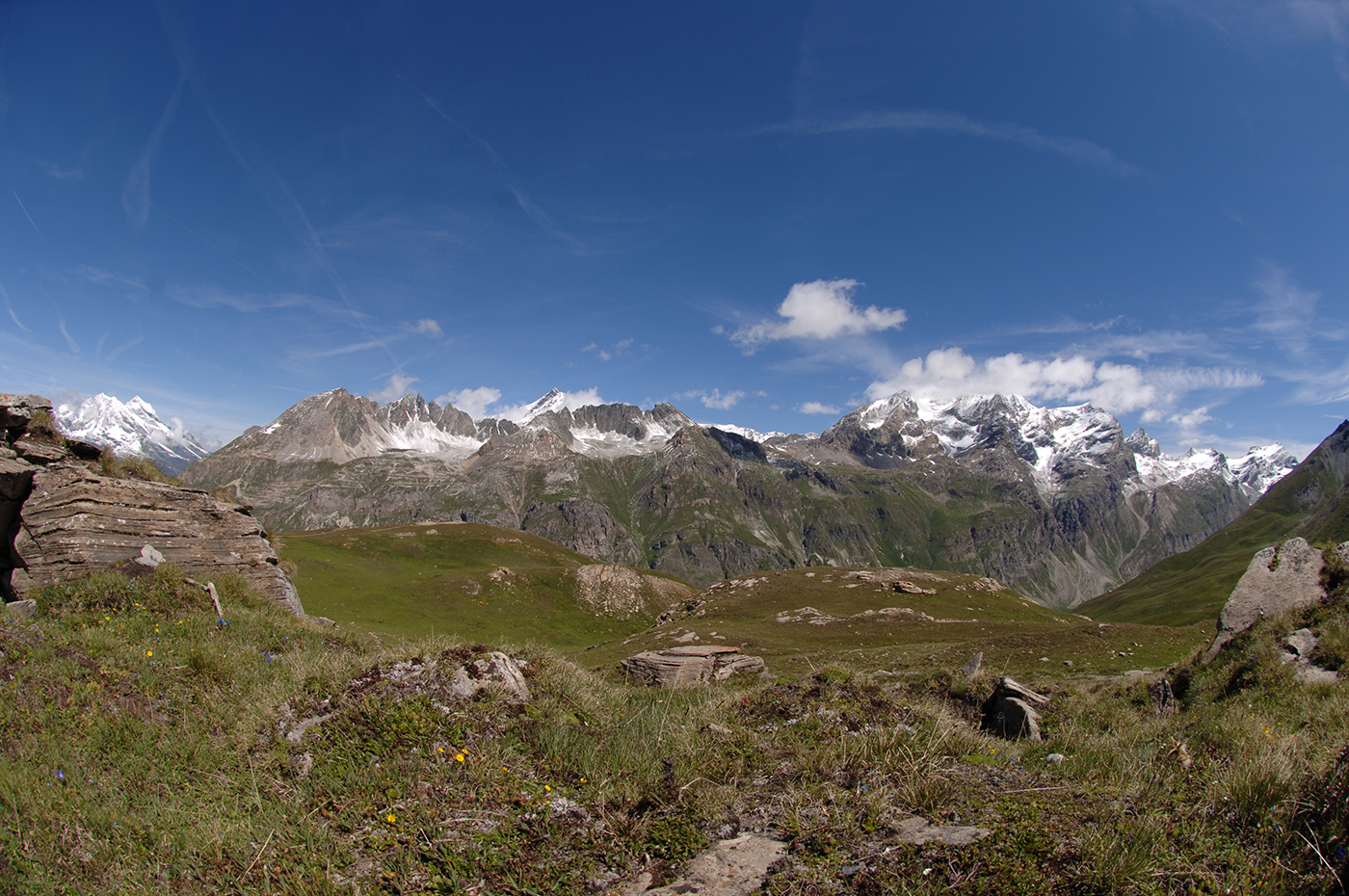 “It was bad luck because the days before and after, the weather was good.” remembers Manceau of the 2011 ITT. The morning of the race, however, was a different story- torrential downpours of cold rain and extremely strong winds left the organisers with little choice- they agreed to cancel the first edition of the race due to the obvious dangers of crossing the glacier in such conditions would bring. The shorter ‘Altispeed’ race, however, was given the green light and most of the ultra competitors chose to stretch their legs on it’s not-to-be-sniffed-at 32Km course with 2500 meter ascent, including the 3386 summit of Aiguille Pers. It was an experience that Manceau remembers well, “The race was disrupted on the ascent of the Pers pass and the Aiguille Pers by poor visibility and low temperatures, it was around 0°, combined with strong winds and ambient humidity. Of course, the feeling of cold was accentuated by the wind chill effect. On the ascent of the Aiguille Pers, the wind speed was estimated at 90km/h.” I get goose-bumps just imagining it. Despite those dreadful conditions the race was won by Damien Vouillamoz in a time of 3.32:21, with Virginie Govignon taking the women’s title in 5.14:08. The race turned out to be something of a baptism of ice for many of the runners- the statistics speak for themselves- of the 403 that started the race, almost half of them DNF’d (did not finish) because of the extreme cold & altitude. Far from being a deterrent though, the Ice Trail Tarentaise attained an almost mythical status among the mountain running community. For a lot of people the 2012 race could not come soon enough. 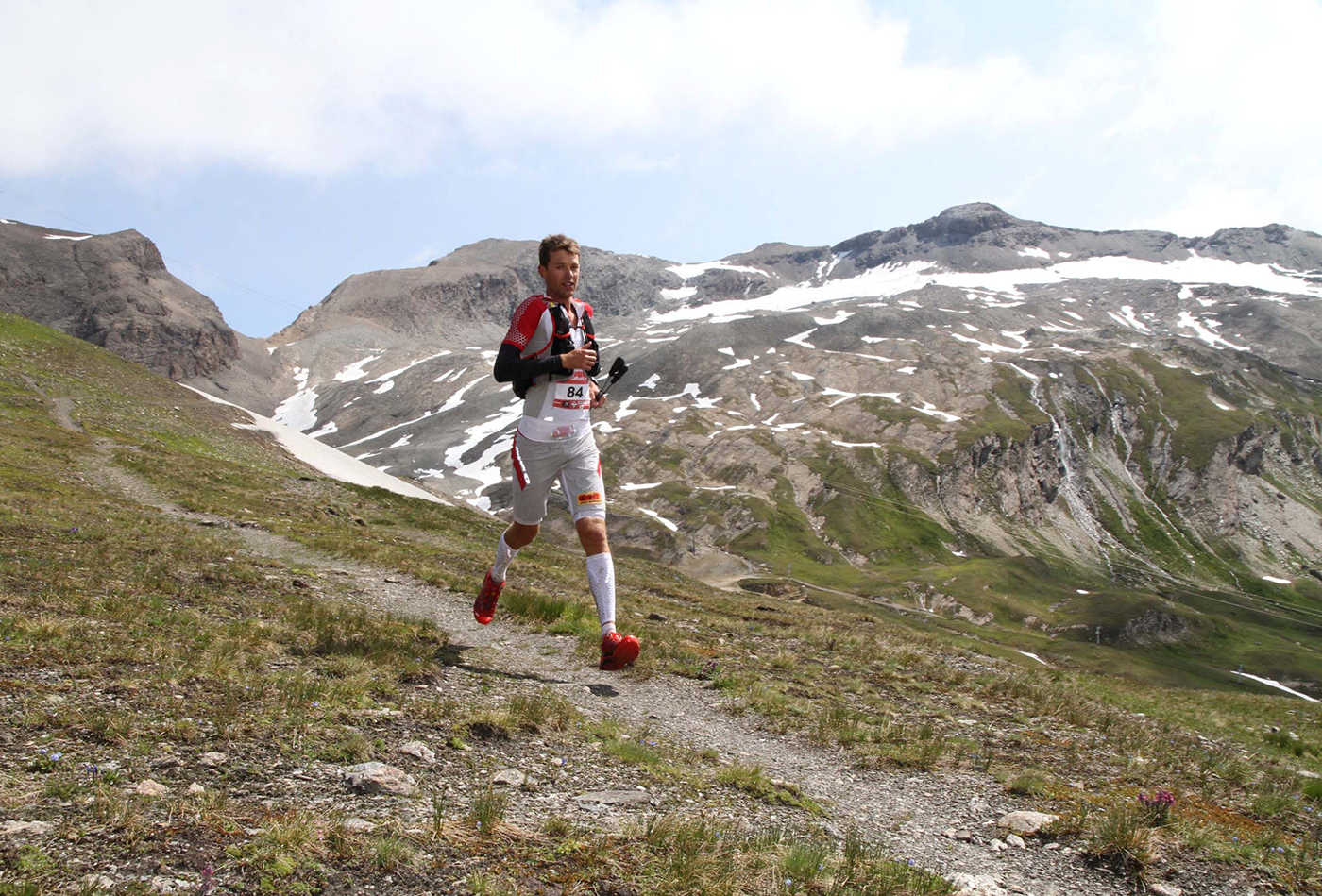 The following year, on the 15th July 2012, the race did go ahead as planned and runners finally had the opportunity to experience the course that Laurent Vinner had envisioned when he first had the idea for the Ice Trail. That’s not to say the weather that morning wasn’t a major concern for the organisers- conditions of the glacier were far from ideal, “it was epic on the ascent of the Grande Motte: cold; -12°c, with the wind chill the temperature dropped to -25 degrees; it was also snowing heavily. However, that’s better than rain regarding feeling cold.” says Manceau. It turns out the organisers had decided to start only after painstakingly studying detailed weather information from the nearest weather station down the valley in Bourg-Saint-Maurice, conditions had been expected to clear after morning and it turned out to be a good call, explains Manceau, “conditions went as expected by the organisation. Shortly after the glacier, the weather became sunny and the runners had a wonderful day to cross the Vanoise National Park. The participants were very happy to have overcome such conditions as they experienced on the Grande Motte.” Salomon’s international team member Francois D’Haene won the mens race in a time of 8.16:35 and the first woman to cross the line was Anne Valero in 11.20:13. For organiser Laurent Vinner, the race had proved an undeniable success and the positive feedback and overwhelming enthusiasm from the competitors, both elite and recreational, gave him the belief to take the race to the next level. After just 2 years existence, with only one ultra-distance race completed, Ice Trail Tarentaise was added to the calendar of the International Skyrunning Federation’s Ultra Series for 2013. In joining the ISF’s Ultra Series, Ice Trail is now mixing it with some exalted company: Transvulcania; Ronda Del Cims; Speedgoat and UROC are the other races that make up the five race Ultra Series. It’s a mouthwatering mix offering everything from tropical to alpine courses, 5 hour sprints to 30 hour epics and finishing up with 100k of americana in Vail, Colorado. So what does it mean for the Ice Trail organisers to be included in the 2013 series? “The best is yet to come,” says Manceau, “with the international elite coming to Val d’Isère we’re very proud to welcome world class runners like Kilian Jornet after only 2 years of existence.” he says proudly, before adding, “we see it as a reward for the whole organisation and a way to prove to our partners they were right to trust us. Moreover, the event is going to take place on 14th july- the French National Day, and if temperatures keep being low for the season as is the case now- then a lot of snow will remain at high altitude. The race should be even more technical. It would be a good thing on the glaciers because of the lower risk of ice and crevasses.” he states, before grinning and adding, “That said, we called the race Ice Trail! It has to be worthy of the name.”

For more information on the Ice Trail Tarentaise.

For more information on Skyrunning.

For more information on Val d’Isere.