The Skyrunning World Series returns to it’s Italian heartland this weekend for the 2013 swan song – the Limone Xtreme. This event will bring the curtain down on both the Vertical Kilometer and Sky series, while last weekend’s UROC wrapped up the Ultra series in what has been another incredible year for Skyrunning. 2014, simply, can’t come soon enough.

While others get their knickers in a twist about terms such as world champion and world tour, let us take a moment and just focus on what’s really important – the mountains, courses that are steep, technical and stunning – Skyrunning courses. They’ve been offering up gem after gem of pure mountain racing goodness, consistently, for years and years. It’s the heart and soul of what they do – courses like the one that’ll be ascended and descended by the runners this weekend by the shores of Lake Garda. I mean, damn, just look at Limone… 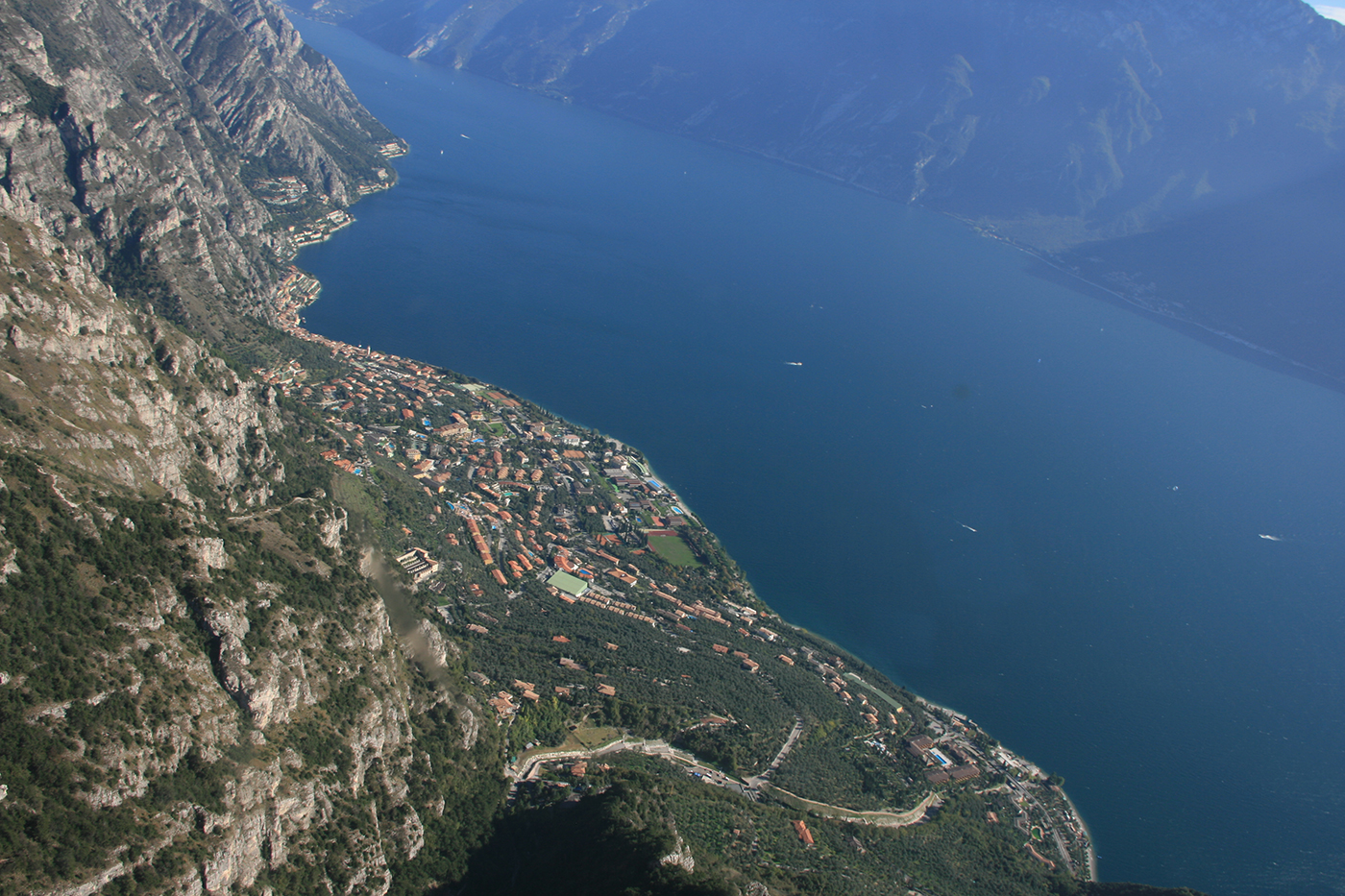 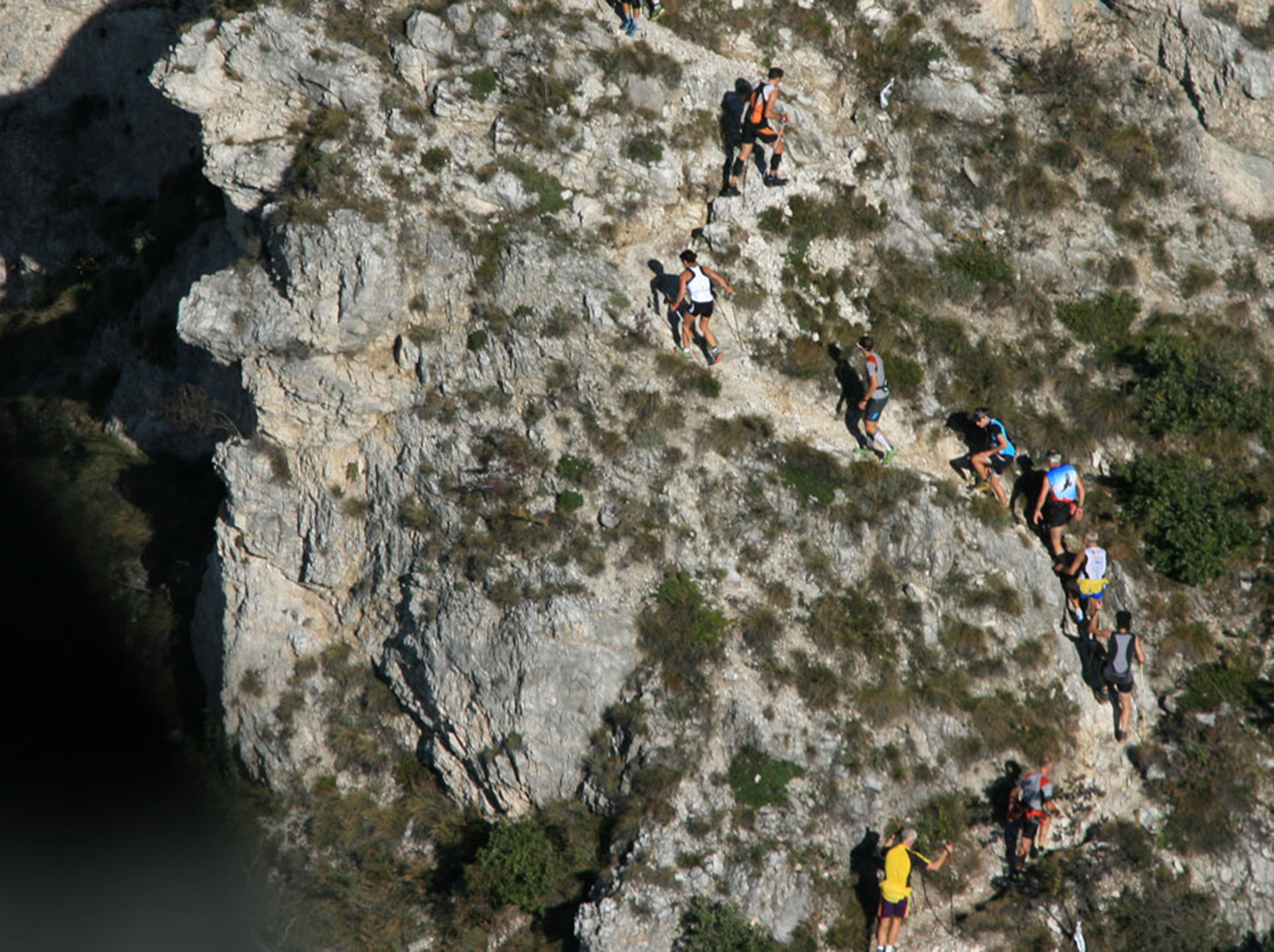 The world’s top skyrunners will gather on Italy’s Lake Garda in Limone to battle for the Vertical and Sky titles at the Skyrunner® World Series finals next weekend.

Kilian Jornet and Emelie,Forsberg, recently crowned 2013 Ultra Series Champions, will compete in both disciplines (! )…Kilian effectively already has the Sky title in his pocket with three clear wins.  Even with the extra 20 points at the final and discarding one race, he can’t be knocked from the top spot.

The long skyrunning season has seen Luis Alberto Hernando (adidas) up front with Kilian in many events, pushing hard and achieving great results but even with a win and his current second ranking with 254 points, he could at best maintain his position.  Tofol Castanyer (Salomon), 2010 SWS champion, after a bad skyrunning season early on has been concentrating on the longer distances and is raring to go after taking second to Luis at the recent Cavalls del Vent.

The women’s race however is between Emelie Forsberg and Stevie Kremer.  Ten points divide them in the ranking.  The title will go to Sunday’s winner.

2011 World Series champion, Oihana Kortazar makes a welcome come-back and, of course, podium material, while Silvia Serafini will add to the completion for the top slots. These top ladies are all Salomon.

Returning to the men’s field, American Alex Nichols (inov-8) is currently ranked 4th and after a second place at Pikes Peak, he will race here to assert his final ranking position.   Look out for Norwegian Erik Haugsnes (inov-8) ranked 6th who made a splash at Mont-Blanc, taking 3rd in the Vertical and 5th in the marathon.

Frenchman Nicolas Pianet (New Balance) ranked 5th, will run both disciplines.  Young Moroccan Zaid Ait Malek only raced Zegama, where he placed an excellent 4th but he shows plenty of promise and will no doubt perform well. Spaniard Francesc Marti (FEEC) 9th will also be competing.

The season has sadly had a number of important casualties who will be unable to attend:  Marco De Gasperi, Tadei Pivk ,Nicola Golinelli and Didier Zago, the latter two both Arc’teryx.

The great field competing in the Limone Extreme SkyRace® will have something a little different to look forward to.  The course is short, 23.5 km, (similar in distance to the Dolomites SkyRace® but with less vertical ascent and descent). The loop, with 2,002m vertical climb, starts and finishes on the shores of Garda Lake, ensuring a spectacular panorama.  Make no mistake, the course is technical, over mostly very rocky limestone, with some very steep and exposed stretches on both the ascent and descent.  Last year’s record time was set by Marco De Gasperi in 2h13’34 and the women’s record by Debora Cardone was 3h02’08”, no doubt times that will fall given the depth of field competing in the final here.

Preceding Sunday’s SkyRace® will be the Vertical Grèste de la Mughéra on Friday October 11th, the final Vertical Series final. With the exception of Kilian already mentioned above, the men’s field offers very strong competition with Urban Zemmer (La Sportiva), 2012 champion, currently ranked 4th.  Series leader and team-mate Marco Facchinelli will need to finish in the top three if he wants to keep the title.  If Zemmer takes the win and Facchinelli drops to 4th, he could hold on to his 2012 title.  Italian Marco Moletto (7th) and Slovenian Nejc Kuhar (10th) make up the rest of La Sportiva’s top contenders.

Other candidates for the top places include Andorrans Ferran and Xavier Teixido ranked 2nd and 6th respectively;  Oscar Casal Mir (5th) and Spaniard Joan Freixa (FEEC), 3rd. Erik Haugsnes (inov-8) mentioned above, will compete in both disciplines. For the record, Kilian is ranked 12th in the Vertical Series.

The course is a very steep and sharp Vertical with 1,100m vertical gain over 3 km. It climbs straight up from the lake shores starting at dusk, to finish in complete darkness, lit by special torches along the way. The entire spectacle will be reflected in the lake below. The men’s time to beat is 41’10 and the women’s, 56’30”.

The events mark an important occasion for Limone, a renowned tourist resort on Lake Garda, better known for mountain biking and wind surfing.  A number of collateral events will take place during the double-final festivities.

Course designer and director is none other than skyrunning legend, Fabio Meraldi who, despite a serious accident earlier in the year, will be overseeing the events.