Take two freakish mountain runners, let them loose in the remote Norwegian Arctic wilderness and leave them to ski, run and dream up routes that take in the best summits, primo views and gnarly terrain — basically everything that gets their blood-pumping and lungs burning. The result is Emelie Forsberg and Kilian Jornet’s Tromsø Skyrace.

‘This race will be a race with everything we love about skyrunning,’ says Forsberg, enthusiastically explaining the details of the course. ‘The route goes from the sea, climbs up round, grassy mountains to an alpine-style ridge. Then down off-trail and up a long, rocky ridge ascent of the higgest summit in the Tromsø area, Hamperokken, before coming back again.’ It all adds up to 42k with 4300 meters of elevation — in other words, Epicness.

It’s not just the route that marks the race out as epic, the location itself is a truly spectacular setting — the stunning city of Tromsø is perched on an island, surrounded by rugged peaks, 350 kilometres inside the Arctic Circle. It’s a place Forsberg holds dear and one which she and Jornet were keen to share with other like-minded mountain lovers, ‘The Norwegian fjords are really special and the area has some unique landscapes — jagged alpine mountains with glaciers that are stuck straight into the sea,’ she says, describing the sights. ‘The areas up there are just so beautiful for races — we love to show that!’ 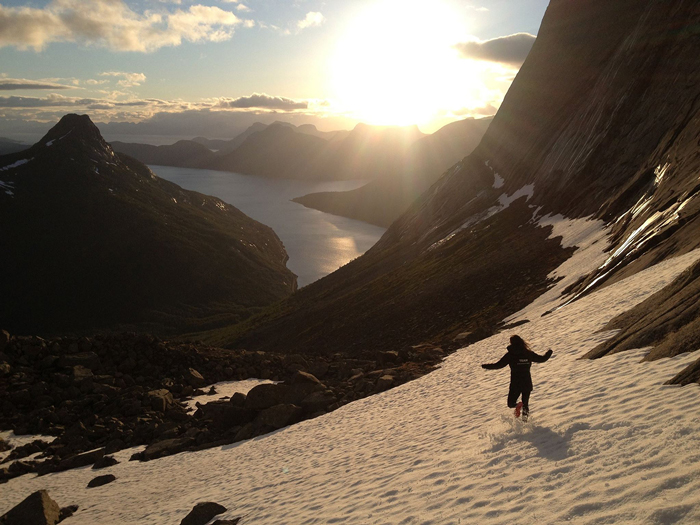 The Tromsø Skyrace will actually be the second event the pair will hold — last winter, while they were holed-up in an even more remote, mountainous and northerly area of Norway called Lyngen, they organised an impromptu Ski Mountaineering [Skimo] race. ‘It was really fun. We got the idea only 3 weeks before the planned date, but with help from organisations in Lyngen we managed to make it in short time,’ she says. Despite the short notice, come race-day, they were pleasantly surprised, ‘We got more entrants than we expected!’

Given the three week timeframe that Forsberg and Jornet managed to pull together the skimo race in — the September date for the Skyrace gives gives them the luxury of a couple more months to get everything in place. They plan on using the time to make the race a little out-of-the-ordinary, ‘We want it to be a special race with a unique ambiance and structure,’ she says. Two of the things that they are focussing on are camaraderie and a leave-no-trace philosophy. ‘This year we will start with a small amount of competitors, only 100, so we can have a great, friendly atmosphere. It will also be an eco race — as organisers we will try to respect the nature and have as less an impact as possible.’ The other thing they’ve organised is a way to free up enough time for them lace up their shoes and do what they love best.

‘We’ve gotten help from the local Skimo and running clubs — Sikten Tind Rando and Tromsö Löpklubb — so Kilian and I will have time to run ourselves,’ says Forsberg. They also plan on inviting some other elites to take part in the augural event, although she is keen to point out that they wanted to make the route accessible to other mountain runners too. ‘We’ve had in mind that it should be OK for less experienced mountain runners,’ she says, although she can’t contain her excitement for the course for too long. ‘One ridge is very exciting — a little scrambling and a fantastic treat when you reach the summit! — otherwise it´s nice Norwegian trails, some nice ridge scrambling, and some off-trail parts.’

If that’s not enough to get you amped for the event, than Forsberg has one, last surprise in store, ‘Of course, I’ll be baking cinnamon buns too!’ she says with a grin.

The Tromsø Skyrace and Mini Skyrace take place on the 6th and 7th September 2014.